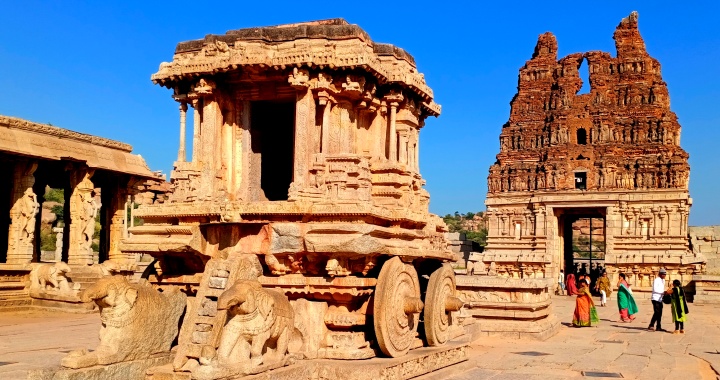 Great civilizations and Empires have been built, thrived, and declined, one such Empire Forgotten with Time is the famed Vijaynagar Empire based in the Deccan Plateau Region of South India during the 14th to 17th Century, from 1336 till about 1614. The Empire was named after its Capital City Vijaynagar "The City of Victory" whose ruins now partly, surround present day HAMPI, a UNESCO World Heritage site since 1986, in eastern part of Karnataka state in South India. On the south bank of the Tungabhadra River, at present Hampi is not more than a village and is one of the best and less explored offbeat rural tourism destination of India. 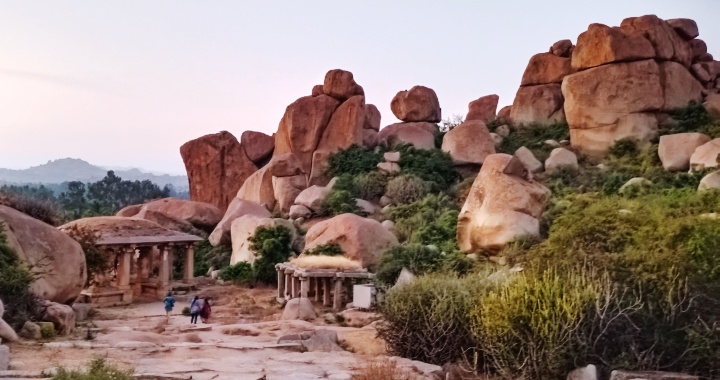 The incredible setting of Hampi surrounded with Granite boulder hills, ancient ruins of Palaces and temples scream history making it an unmissable experience for every type of traveller to explore the past and present at one time. Hampi A UNESCO World Heritage Site was Listed second in 'The New York Times' 52 Places To Go in 2019, List. For Best Hampi Heritage Tour you can contact and plan with Summit Safari "The Travel Experts", on WhatsApp number +919805051102 or email vishal@summitsafari.com They'll help customise a perfect Hampi Tour Pacakge for you, provide you with local English speaking guide, arrange accommodations, take care of transportation with all sightseeing and activities to do in Hampi. In short Summit Safari India will provide you an authentic travel experience beyond your imagination. 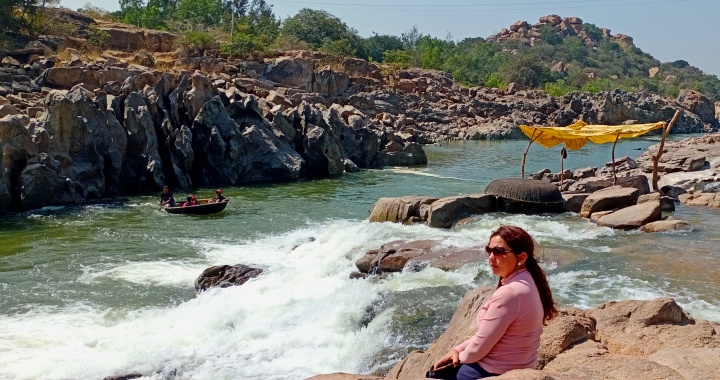 Time required to plan the best trip to Hampi, needs to be minimum of 3 Nights / 4 Days tour, so you can explore the best tourist places to visit in Hampi while enjoying the ambience around at your own pace. You can plan to take a delightful journey on a tour through the heart of Deccan plateau where India's Lost World - Hyderabad with Hampi and Mysore Tour - 13 Nights / 14 Days is one of the best travel itinerary, that takes you deep in the region full of abundant natural beauty which has seen some of India's most remarkable empires flourish and decline; The Vijanagara Empire, once the richest empire in the world, produced outstanding architecture now the world-class UNESCO heritage and archaeological sites, till now seen by only few visitors, visiting India

Under the rule of Krishna Devraya (15th century) one of the Southern India's Greatest Hindu Empires Vijaynagar turned it’s capital "Hampi", into one of India's richest grand city with forts, palaces, temples, farms, water canals, organised drainage and markets where Gold, Rubies, Diamonds were sold in open markets. Hampi attracted traders from all over the world including Europe, Persia, Portugal. In 1441 Timurid ruler Shah Rukh of Persia sent Abdur Razzaq as an emissary to Vijayanagara, who wrote in his travelogue "City is built in such a manner that seven citadels and the same number of walls enclose each other". About local markets he wrote Bazzar - each class of men belonging to each profession has shops contiguous one to the other; the jewellers sell publically in the open bazzars Silver, Gold, Pearls, Rubies, Emeralds, and Diamonds. By 1500 CE, Hampi-Vijayanagara was the world's second-largest medieval-era city after Beijing. 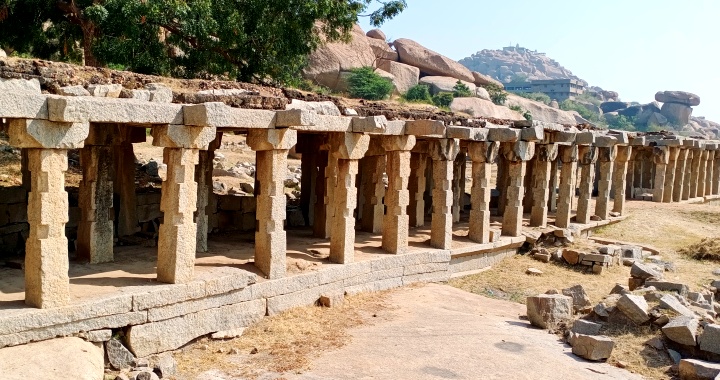 As per the historical memoirs left by Portuguese and Persian traders to Hampi, in 1565 the wars between Muslim Sultanates and Vijayanagara Empire continued and followed by a massive destruction of the infrastructure fabric of Hampi and the metropolitan Vijayanagara Empire. Conquered by the Deccan Muslim confederacy in 1565, the city was pillaged, looted and burnt for six months after the war, then abandoned as ruins, which are now called the Group of Monuments at Hampi. An attack of six months long definitely had to bring such massive destruction that it would have taken them forever to rise again. The temples of Hampi were damaged and most of the markets were robbed. This was one of the biggest attacks that Hampi witnessed and their golden era with this came to an end. After the attacks, the empire was ruled by different Kings; however, nobody really could bring back the lost glory. 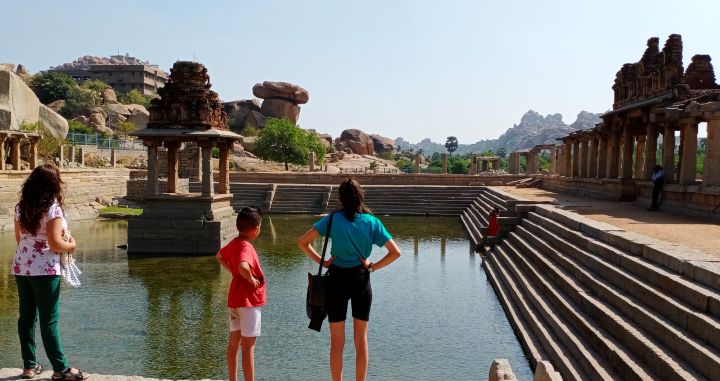 Hampi takes you back into the time......Today it would not be wrong to say HAMPI an open air museum in India of Dravidian architecture, history, and religion. Only a few number of tourists visit the ruins of Hampi each year, as it is still unknown to the outer world and is the best less explored offbeat rural tourism destination of India. Discover the glory of the past through the remains of medieval cities, ancient temples, and archaeological sites of Hampi the world’s largest open air museum. It is among one of the very unique places- The Best and The Less Explored off beat destination of India. 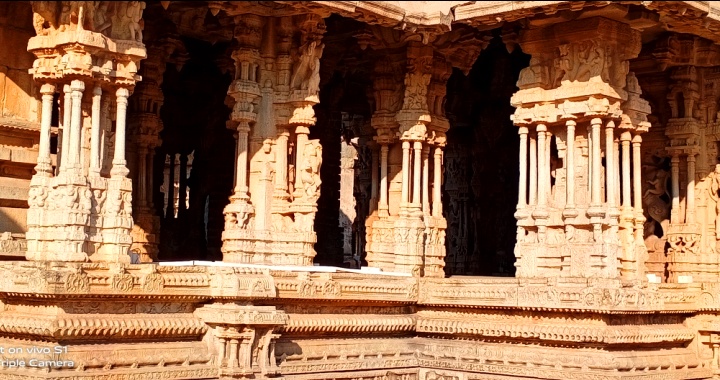 The magnificent and elaborate structures in Hampi where built across 200 years and spread over 4,18,724 hectares. With wealth and prosperity, art and architecture flourished and evolved into its own unique style here. A tour to Hampi and the nearby villages is a great way to explore and appreciate the rural lifestyle along with the History, Architecture and World famous Cultural Heritage sites. The UNESCO World Heritage Sites of the last great Hindu kingdom Hampi - India’s Lost World features 1,600 surviving remains including forts, temples, Elephant stables, shrines, markets, irrigation systems, stone chariots, watch towers, musical pillars, horse water tanks, step wells, stone bowls, stone plates, cave paintings, queens bath and many more. A large number of monuments and settlements have been carved out of the granite stone found locally.

Hampi - A perfect destination for Rural, Cultural, Heritage and Village Tours in India 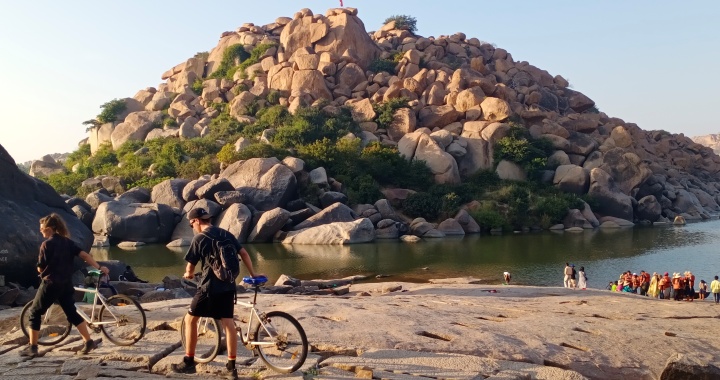 Hampi is a fusion of different components of architecture, landscape, culture and people. Hampi as a perfect rural tourist destination offers Authentic Travel Experience where you can explore countryside's on a Hampi Village Tour and get a deep insight to the rural life as lived in the villages of India. Summit Safari India takes you on a journey through beautiful villages where you meet the rural communities, unending Banana Plantations, the paddy fields set up below the rustic hills with big granite boulders, herd of buffalos, cows, goats, bull carts, people working in fields, ladies in their colourful saree, sights of Tungabhadra River in Hampi, and the Hampi’s glorious charm are some of the experiences that will leave you stunned by the end of your journey. 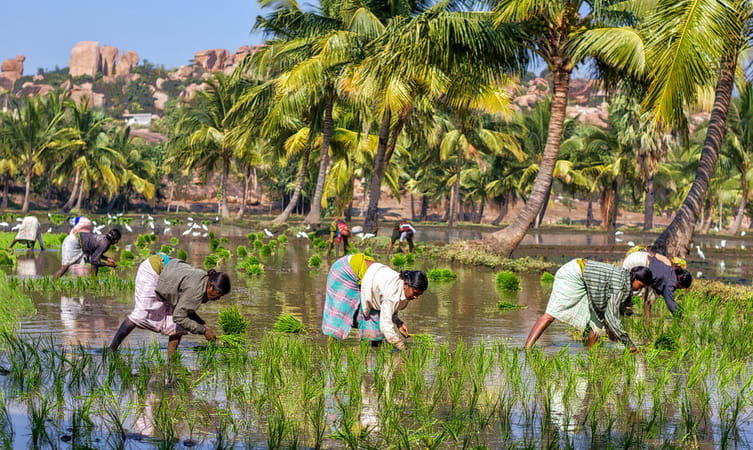 As you walk through the lanes of Hampi village you will pass by guest houses run by locals, the shops selling handicrafts, restaurants serving delicious food and houses where in front of the doors everyday people make rangoli designs to decorate the entrance of houses. Hampi and the nearby villages have a lot to explore and enjoy.

The Mythological and Pre Historical Legends and Ramayana Tales of Hampi 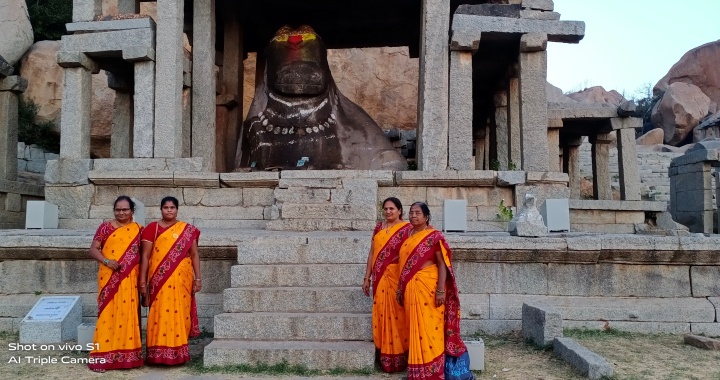 Human settlements in the region date back to at least 2000 BCE. Boulder hills surrounding Anegundi village to the North of River Tungabhadra are filled with evidence of Neolithic sites. At Kadebaklu there is a Neolithic metal foundry adjacent to a rock shelter where ceramics of different types have also been recovered. At Hire Benakal we find ancient burial sites with over 60 dolmens. Ceramics and rock art has been found at this site as well. The name Hampi is evolved from Pampa, the ancient name of the river Tungabhadra that flows and make the entire region fertile. Hampi is also known as Pampa Kshetra, Bhaskara kshetra and Kishkindha kshetra as mentioned in Ramayana. Pampa is believed to be the daughter of Lord Brahma - The Creator Of Universe. Click on the link for more information Brahma The Creator of Universe 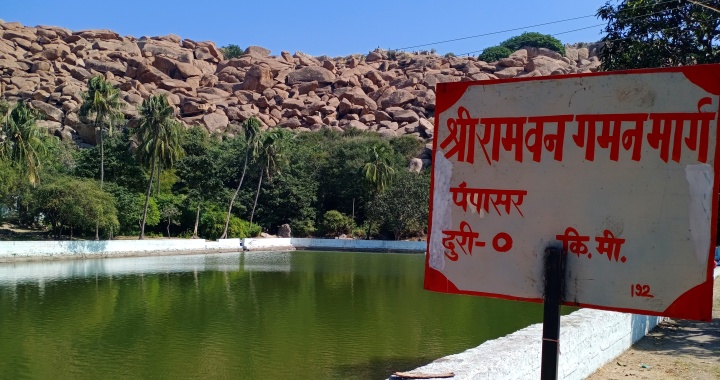 Hampi has a strong mythological story associated with Ramayana an ancient Indian epic where Prince Rama had to go to exile for 14 years and during that period his beloved wife was been abducted by Ravana the kind of Lanka (now Sri Lanka). It follows Prince Rama's quest to rescue his beloved wife Sita from the Ravana the king of Lanka with the help of an army of Monkey King Sugreev who rules this area Pampa Kshetra as Kiskindha the "Vanara Kingdom" (Monkey Kingdom), present day Hampi and the surrounding villages. Hampi is on the actually route where Lord Rama had stayed with his younger brother Laxman, while in exile and have important religious sites associated with Ramayana. We still find many mountains, caves, temples, water ponds associated to those ancient times where Lord Rama, Hanuman, Sugreev and Vali had lived. Click on the link for more information on Lord Rama. 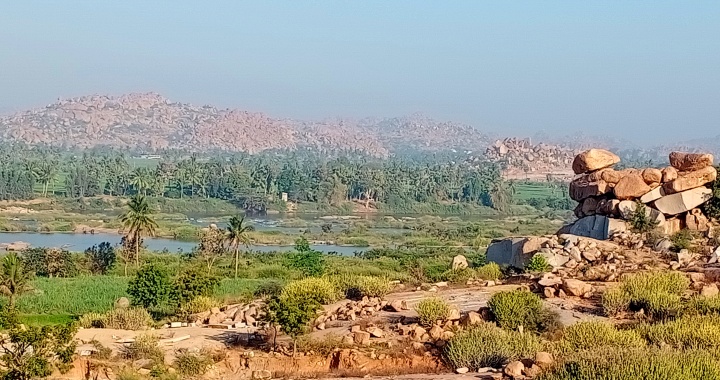 Hampi also had Anjani Parbat( mountain),where Lord Hanuman (the monkey God), was born. All these places have immense religious significance for the Hindus for instance Pampa Sarovar where Rama meets Shabri, Rishimukha Parvath where Ram and Lakshman first met Hanuman and Sugreev, Vali Gufa where Vali and Dindhubi fought to death, and many such sites. 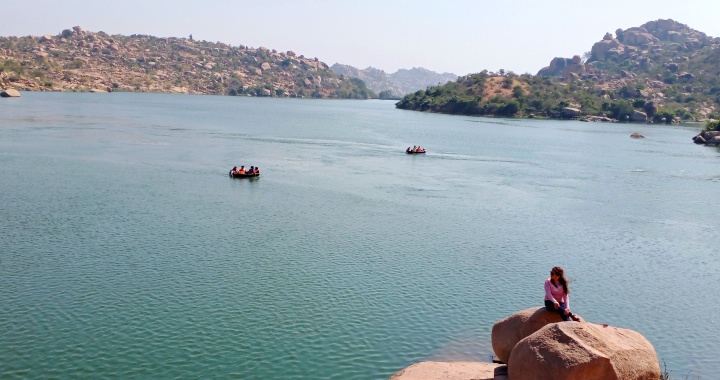 Weather of Hampi is moderate and dry throughout the year. The best time to visit Hampi is during the winter months of October to March, when the climate is moderate cool, pleasant and perfect for exploring the UNESCO World Heritage Sites. Tour to Hampi, sightseeing and outdoor activities are on its peak specially from November to February in winters, which proves to be the best season to visit Hampi, as the sun is not too hot even during the peak times of afternoon. The temperature during the winter months remains around minimum 18° C to maximum 30°C.

The summer temperature remains with minimum around 26°C – to maximum 38°C from March End to Early October. Summer climate bring high temperatures at Hampi making the walking tour difficult for the travellers to visit the World Heritage sites. As the monsoons arrive from Mid June to Mid September weather changes in Hampi, keeping the temperature little lower effecting increase of humidity in temperature of Hampi.

Places Hotels and Guest House Accommodations to Stay in Hampi 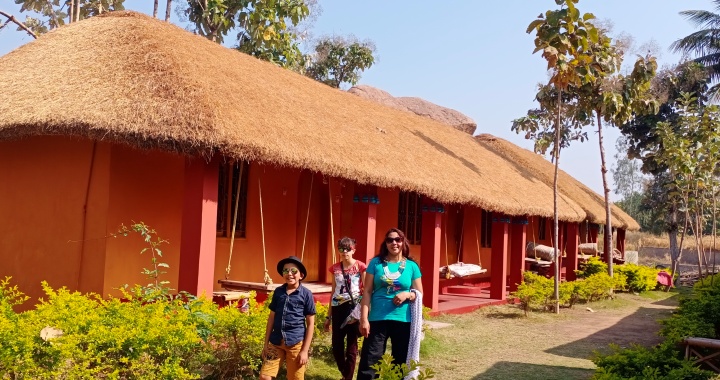 There are plenty of best options to stay with a great choice in hotel accommodation in Hampi, well equipped with all modern amenities. To cater for all kind of travellers around the world from Luxury to backpackers hotel accommodations in Hampi comprise variety of star category hotels, deluxe and budget hotels, guest houses, home stays. The budget hotels and guest houses in Hampi are lined up closer to village centre around the market lanes, near to the village bus station and Virupapur Gaddi – Hampi Island other side of the River Tungabhadra, near the village of Anegundi, easily approachable by a ferry near Virupaksha temple Hampi.

While for people looking for more luxury, and style the more modern Hotels are in the outskirts of the village and provide solitary time as well. One can choose the place of accommodation according to one’s requirement and budget and Summit Safari "The Travel Experts" +919805051102 or email vishal@summitsafari.com will help you suggest and book the Hotels in Hampi for you as per your interest.

How To Reach Hampi By Air, Train and Road 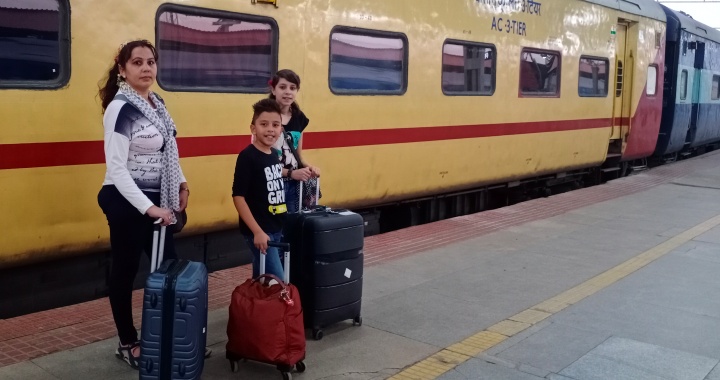 How to reach Hampi one of the most prominent historical village of Karnataka state in Southern India - is not an issue. Hampi as the renowned tourist destination for its group of UNESCO World Heritage Site monuments, and is very well connected from Bangalore, Chennai, Hyderabad, Badami, New Delhi, Mumbai, Goa, Mysore, Kerala and rest of the country.

The other nearest airport to Hampi are Hubballi (170 kms) with a few direct flight connectivity from airports in South India including Bangalore, Hyderabad, Kochi, Chennai, Mumbai and from New Delhi with a flight enroute change at Mumbai. Bellary airport is 60 kms from Hampi but currently is not operational as updates of 2022. Both from Bengaluru airport and Hubballi airport, Taxi services to Hampi are available.

The city of Hosapete as well as the village of Hampi (13 kms from Hosapete) is well connected by road to major cities in South India. State Road Transport corporation KSRTC buses and private buses are available to travel from Hosapete to major tourist destinations in Karnataka and to the nearby states including Badami (140 kms) Bangalore (350 Kms), Hubblli (165 kms), Hyderabad (380 kms), Mysore (430 kms) and Goa (350 kms). You can also hire a private taxi to reach your desired destination.