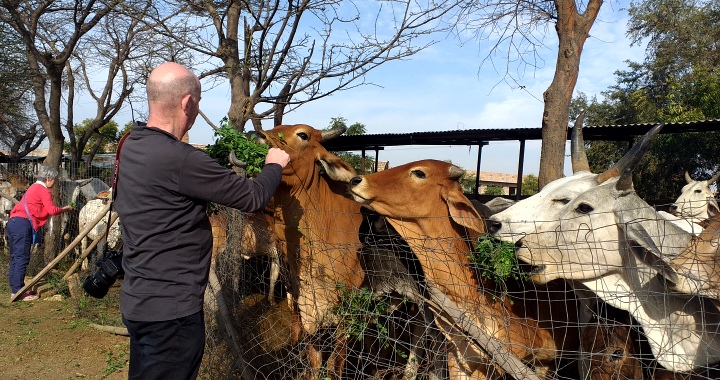 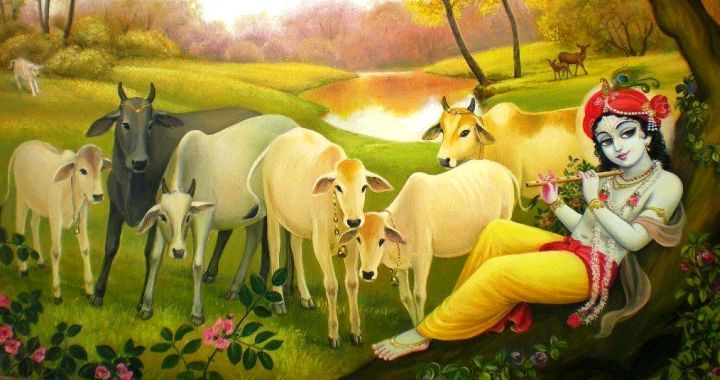 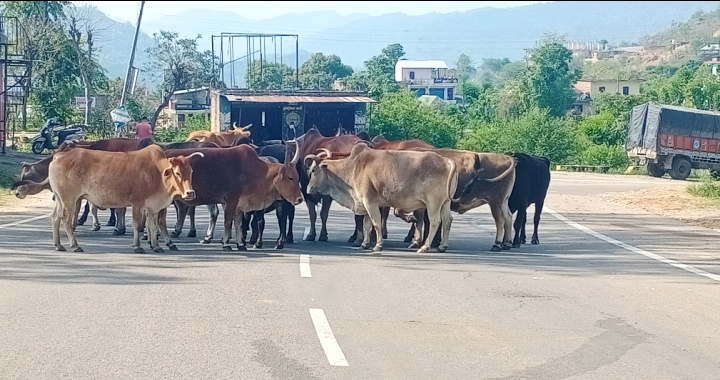 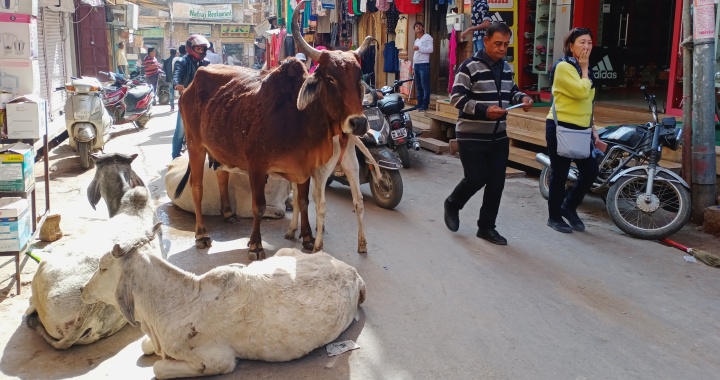 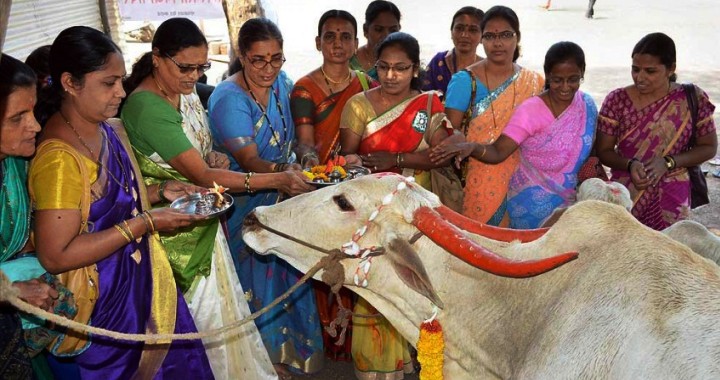 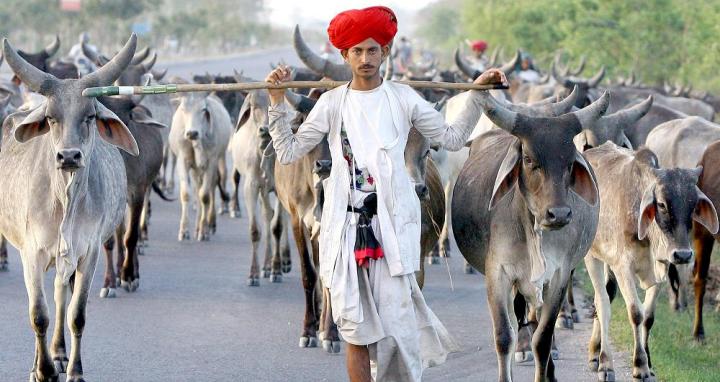 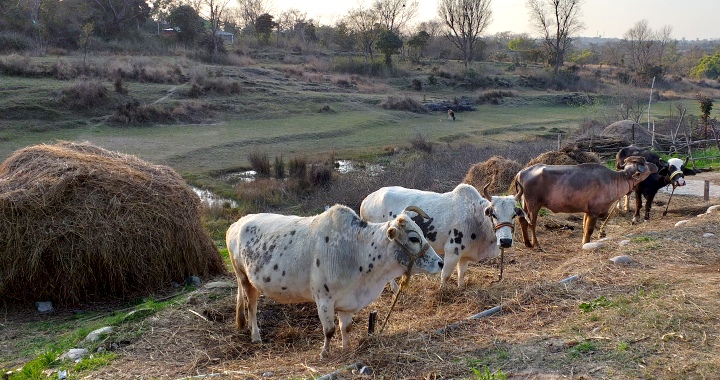 Why Do Hindus Worship The Cows?

The cows are treated sacred and holy animals in Hindu culture in India. The cow and bull represent the symbol of Dharma (right way of living). Hinduism is based on the concept of omnipresence of the Divine and the presence of a soul in all creatures, including bovines. Thus, by that definition, killing any animal / anybody would be a sin: One would be obstructing the natural cycle of birth and death of that creature, and the creature would have to be reborn in that same form because of its unnatural death.

Verses of the Rigveda (The ancient religious text books of Hindus) refer to the COW as Devi (goddess), identified with Aditi (mother of the Gods) herself. It is believed in Hindu religion that in a body of a cow all 330 million Gods, Goddesses and deities are believed to reside.

Ancient India developed as an agriculture-based civilization, where wealth was determined by the number of cows that a family possessed. The humble cow became legal tender-exchanged for goods and service, proudly presented as dowry at weddings, reluctantly given away to meet tax obligations and GAUDAN( donating cows) to Brahmin Priests. As per the belief salvation is guaranteed and after the death the soul reach heaven only after crossing the Mythological Vaitarani River, by holding the tail of the cow that you donate to the Brahmin priest during your life time.

Cows as the symbol of wealth and prosperity were considered the highest of all gifts. The ancient Hindu scriptures have it that nothing is more pious than the gift of cows. "There is no gift that produces more blessed merit. In Hindu mythology" Lord Rama 7th incarnation of God Vishnu (the preserver of the Universe) was given a dowry of thousands of cows and bullocks when he married Sita around 7,000 years ago.

Lord Krishna, one of the 8th incarnation of God Vishnu (the preserver of the Universe), grew up in the pastoral family around 5,000 years ago. While tending to his herd of cows, he would play the flute to keep them happy.

It is believed that Cows represent SACRIFICE. Without them, there can be No Sacrifice. Cows are guileless in their behavior and from them flow Sacrifices……….. in the form of milk, curds and butter. Majority of Hindus are vegetarian, Cow’s milk is the main source of nourishment for the people. The cow acts as a surrogate mother by providing milk to human beings for the whole life that is why Hindus treat cows HOLY. So the cow is truly the mother of the world and this is how it becomes the Holy Cow and is sacred to Hindus.

Referred as Gau Mata “ The Mother Goddess” Cow remains a protected animal and Hindus never slaughter a cow or eat beef meat. Apart of Cows many of other animals, birds, reptiles, and fishes are also protected in Hinduism as they all are associated to different Gods, Either as the servants or the vehicles to the Gods. According to Atharva veda ( ancient Hindu texts) the Earth was created for the enjoyment of not only human beings but also for bipeds and quadrupeds, birds, animals and all other creatures. These ideas lead to the concept of Ahimsa “ Non-Violence”, as said in another Hindu religious text Manusmriti ‘He who injuries or killed innocent beings with a desire to give himself pleasure, never finds happiness, neither in life nor in death’.

Cow dung mixed with hay is made into pats and after being dried in sun is used in the wood stove for cooking. It is a very good source of fuel used by India’s large rural population. Cow dung mixed with clay is used as Wunder Material for plastering houses, huts, walls, floors and acts as an effective insecticide as well. Cow dung is used as organic fertilizers by the farmers. Cow’s dung is rich in methane gas which is used as bio gas to generate electricity and heat.

The five products of the cow (pancagavya) — milk, curds, ghee (purified butter), urine and dung — are all used in Hindu worship during the rituals at the time of death or Birth in a Hindu family.

Why you see Cows in the Middle of an India Street ?

Indeed for a visitor, on holidays for the first time to India, driving on Indian roads is a hair raising experience, with motorized vehicles, animal-drawn carts, human powered handcarts, bicycles, motorcycles, walking people, and animals all together on one road, competing with each other to get from one place to another. This all takes you right into the action, in general sense of disorder and within this disorder there is an order where no one runs over other and life revolves smoothly with the Holy COW sitting, calmly in the middle of the road.

People are often surprised to see Cows walking neglected around city streets, living on garbage from the gutters, or people feeding the cows by the side of the roads and often call them Wild Cows.

There are No wild Cows in India - but the people tented cows for milk. When the cow gets older, stops producing milk, and is not of any use to the owner, its owner leave the cows by the side of the road. The cow’s owner don’t want to feed a old cow which is not of any use to him now, and finds politically correct to abandon the unfortunate creature on the streets, rather than taking care of it or sending it to a slaughter house which is religious wrong for a HINDU.

This is how a tended Holy Cow becomes the Wild Cow. that many people visiting India, observe on the Indian road. Cows become homeless and are on the streets by the fault of we Humans, but Cow is very sacred to Hindus in India and Nepal- where the cow is the national animal. On auspicious days of the Hindu calendar, cows are worshipped and offered food and sweets and believed to remove your sins.

Every time a meal is cooked in the Hindu house-hold, the first bread (roti) is left out for a cow to consume. People also offer green grass, sweets, food to the cows as the act of piety, so once on the streets Holy Cow hardly starve. There are good numbers of organizations dedicated and devoted to ‘Cow Protection” and are working with the help of local communities to provide shelter and food, for what we call the Wild Cows.

In India, the slaughter of cattle is allowed ( But of Not Cows) with restrictions like a 'fit-for-slaughter' certificate which may be issued depending on factors like age and gender of cattle, continued economic viability, etc., but only for bulls and buffaloes and not for Cows in fourteen states; it is completely banned in six states with pending litigation in the supreme court to overturn the ban; while there is no restriction in many states.

The fact that one man's food is another man's belief, may create communal disharmony in India and may leads to unwanted incidents among the different communities….!