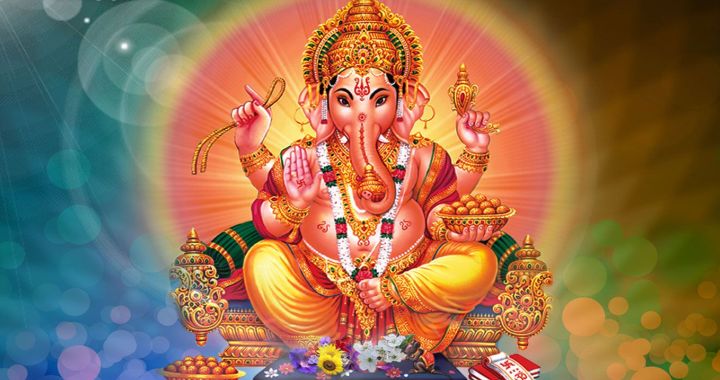 Lord Ganesha, also known as Ganapati and Vinayaka is a widely worshipped deity in the Hindu religion. Lord Ganesha - the son of Lord Shiva and Goddess Parbati (Shakti) -- with the head of an elephant - represents the power of the Supreme Being that removes obstacles and ensures success and good luck in human life. The elephant head symbolizes intelligence and wisdom. His big ears enable him to listen easily to his worshipers. Ganesha is often shown riding on or attended by a mouse. Ladoo is the favourite sweets of Ganesha.

The entrance to most Hindu temples, forts, palaces is adorned by an idol of Ganesha. In religious rituals the first God to be worshiped and invoked is Ganesha regardless of the deity whom the ceremony is dedicated to.

An interesting tale narrates how Ganesha got its Elephant head—Shva, after marriage to Paravati9 Shakti), went off to Mount Kailash to meditate. He became so engrossed in his meditation that years went by. On the other side Paravati the wife of Shiva was alone at home and one day before having bath, to guard the entrance, Parvati created a human child - Ganesha - out of the earth and asked him to guard the entrance while she took a bath.

While Parvati was bathing, completing his meditation Lord Shiva returned home and wanted to enter the house. However Ganesha blocked him from entering saying that it was his mother's orders not to allow anyone inside and he is guarding the entrance. Ganesha refused anyone entering house as his mother is bathing.

Shiva did not know that he was the father of a child and Ganesha, who had never seen him failed to recognize his father. In a rage, therefore Lord Shiva cut off Ganesha's head and entered the house. Parvati, upon learning this, was overcome with grief. Upon learning that Ganesha was his own son, Lord Shiva felt sad too. A hysterical Paravati insisted that Shiva return her son back to her.

Shiva ordered his followers to go down the Himalayas( their abode)and cut off the head of the first animal they see. The followers find the baby elephant and chopped his head bring it back to Shiva and Shiva fixed the head of baby elephant on Ganesha bringing him back to life.

Parvati was unhapp that her son would be ridiculed, but Shiva Consoled her saying and blessing Ganesha hat he would be worshipped first by the people before any other god.

For this reason, Hindus worship Ganesha first, before beginning any religious, spiritual or worldly activity.

Ganesha's marital status, the subject of considerable scholarly review, varies widely in mythological stories. One pattern of myths identifies Ganesha as an unmarried brahmacari (bachelor). Another pattern associates him with the concepts of Buddhi (intellect), Siddhi (spiritual power), and Riddhi (prosperity); these qualities are sometimes personified as goddesses, said to be Ganesha's wives.